The Big Broad World, and the Isolate

I read three blog posts this morning that got me thinking.

Two were from Christopher Rice (one and two) about when gaming campaigns (RPGs) develop to the point they're a fantasy world unto themselves, not just hack & slash adventures.

The other, by Peter Dell'Orto (here) was a response to Chris' idea, and about how to prevent your campaigns from developing.

Together, they were a fascinating look into the differences within fantasy gaming.

At first I thought, "Who wouldn't want to allow their fantasy world to expand into its own world?"

Then with a shock I realized I have two fantasy fiction series lined up, and between them I cover both philosophies.

A couple weeks ago I described to a good friend and fan how I see the Orinthia series developing. I forsee it as kind of like a pinwheel.

I'm writing about the complex ultra-realistic (for fantasy) world called Orinthia. I am using miniseries of trilogies or individual volumes to connect together and interrelate with the others to form a coherent whole.

There's a tall stalk in two shades. I expect to write 3 to 5 novels describing the First Age of ancient history. A few weeks ago, while building out the deep background for all these stories, I outlined and partially wrote the first 3 of these novels. 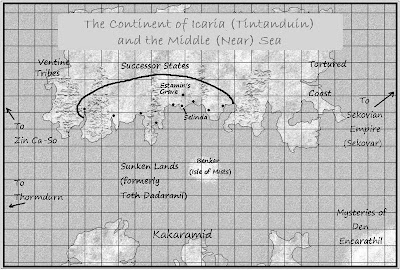 And I'll write another 6 to 8 novels about the turmoil that ended the Second Age, when powerful mages ruled the world and then got overthrown. Some of these novels are outlined and partly written already, also.

Then there's the pinwheel.

The culmination of my fantasy epic will be in the Third Age, when many factions vie for power and it's not entirely clear who might come out on top.

Here, several miniseries will follow the lives of sets of characters and, like the spokes of a pinwheel, will all merge at the center into a convergent storyline.

It is! I actually began building this world in the summer of 1998 (some of you might not even have been born yet!). I ran it as a homebrew RPG system for some friends, but didn't get far. I resurrected it when I wanted to start writing fantasy novels.

I return to old projects frequently, and I have a good head of steam built up for this one, so I'm sure this one will turn out well.

This first book introduces two young boys - teenage brothers - who stumble upon a murder that involves them in a plot of interfactional intrigue. The murderers want to kill them, but they're not the only ones, and they're given a necessary lesson in the history of Orinthia, and its geopolitics and philosophies, religious or otherwise. 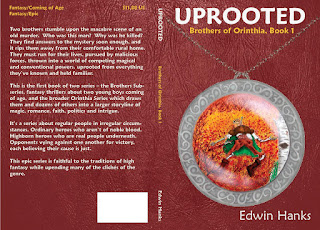 The Brothers of Orinthia series only provides hints and glimpses at the world around the boys. But you can quickly tell that there's a well-developed backstory behind everything.

And I can tell you I'm still working to flesh out more. I feel like I need to have it mostly developed so that I can do as I did in my first book - include more hints and partial solutions to questions, more tidbits of mysteries to be resolved later.

To see the rest, there will be more books, more series, some from the same time period, and others from different periods. I dare to believe that it might someday be as involved as the Game of Thrones or Wheel of Time series.


The Adventures of Nighland Key

But back to Peter's thought. Why would someone want their story to NOT develop??

I went through a phase, after beginning to write the Orinthia series, where I yearned for simpler things. Fantasy environments that were fun and involving, but didn't require a lot of thought. Just enjoy.

I started reading Dungeons & Dragons novels, other related "gaming" fiction, started playing Icewind Dale for hours at a time. Eventually, finding not enough fiction easily available, I decided it would be fun to write a simpler RPG style series of books.

Thus was born Nighland Key and his band of adventurers!

I've begun writing this series, and planning, and developing the characters. It's fun, but it's not done. More Orinthia ahead before these will be available. But they're enjoyable to write, and I would presume they could be written more quickly, so you might see them in the not too distant future.

So, I realized, I'd mirrored in my own writing the dichotomy between these seemingly irreconcilable points of view on worldbuilding. Sometimes you just want something simpler to read, or play, or write.

Thanks for reading! Now I'm returning to writing the Orinthia series.

As always, I'll encourage you to please pick up Uprooted and leave a review on Amazon. Reviews provide life for authors like myself, and will generate more sales.
Posted by Unknown at 12:49 PM