This is the first sample of my writing I will post. This scene is one of the earlier ones in a story about an expansionist Prussia in an alternative historical fiction story called "Fire Warms the Northern Lands." Even though this was before I really refined my "voice" for that story, I'm relatively proud of it, as an isolated scene.

Major Stefan Krohn regarded it as very odd -- and lamentable -- that he was spending Christmas of 1839 in a place where one was forced to seek the shelter of a thatch hut so that one could merely sweat, rather than burn. He was very much looking forward to this evening’s dinner, at Reverend Breitenfeld’s cottage. There, he could perhaps forget his misfortune amidst a modest European style dinner.

Breitenfeld led him outside once more, into the blazing sun and suffocating humidity. It was the deep of summer in Samoa, Krohn could never avoid being aware. 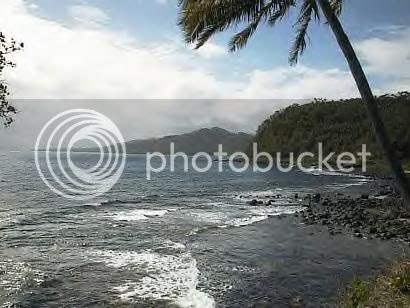 “This, Herr Major... Is this the quality you require?” Breitenfeld had taken a length of sturdy rope from a dark-as-night villager, and held it up for Krohn’s inspection.

Krohn looked skeptically at the smiling craftsman before examining the rope. Indeed, this seemed to be a fine rope, perhaps better than typical Army standard in Prussia. “This is a length of rag,” he said to the reverend, “I hope he’s not expecting a high price for these ropes.”

Taken aback for a moment, Breitenfeld assured Krohn, “All native products will seem a bargain compared to what you would find in Europe. These are not sophisticated people.” After a moment’s contemplation, he added, “In fact, he cannot understand a word you are saying, so...”

“He can understand my tone of voice,” Krohn fixed Breitenfeld with an almost derisive stare. Did he actually enjoy spending time with these savages? Perhaps he had gone a bit native. “I don’t intend to pay more than I absolutely have to. This is the King’s money, and it’s not my job to transfer more than I must to... unsophisticates.” He glanced again at the negroid, whose smile had gone a bit slack.

Count von Kauperke had commissioned Krohn to travel the targeted Polynesian islands, find a location for a central Prussian outpost, and make ready the necessities of building it. The war in China, and the anticipation of the island of Hainan soon becoming a center for Prussian commerce, had embued the effort to colonize Polynesia with renewed importance. Krohn had decided that the best choice for a new settlement would be the island of Fidji, and it was his intention to build a small fort there. Now he knew he could purchase locally-produced ropes and other materials, avoiding the trouble and expense of shipping quantities from home for construction in the nearby islands.

Shouts and whoops suddenly drew their attention toward the beach. “The boat from our visiting ship is landing,” Breitenfeld explained. “That’s quite a treat, as you can imagine.” They had discussed earlier how Samoa was occasionally visited by foreign clippers in addition to the regular six-monthly visit of a Prussian vessel. He claimed to have seen a French, a British, two American and even one Japanese ship over the past four years. Naturally, considering Prussia’s interest in these islands, that was of some concern. The sleek clipper that had appeared in the channel this morning was American.

The rope forgotten, both men instinctively headed for the shore. Five men began wading in from the boat as a dozen natives splashed into the water to help unload supplies. Three of the white men were sailors. Ratings, to Krohn’s eye. The fourth man wore a casual tropical outfit, and the fifth... The fifth wore what Krohn could only assume were cowboy’s chaps, with a hat to match.

As Europeans, Krohn and the reverend drew immediate attention from the two Americans. They introduced themselves as Bret Gibbs, a rancher, and Steven Cramer, an American businessman.

“We had heard there was a Lutheran mission here,” Cramer said. “We wanted to drop by and get to know you... Set up some arrangements for trade.”

Breitenfeld was about to continue, conversationally. Krohn cut him off with an interrogatory. “From where will you be trading?”

The rancher caught the edge in Krohn’s voice. Cramer, ever the diplomat, ignored it. “We’ve set up a new trading post at Palmyra Atoll – it’s approximately between here and the Sandwich Islands. Bret has a small ranch in the Sandwiches, and I convinced him that between the two of us we could combine his ranch and a few scattered trading posts into some very good business.”

“Palmyra?” Krohn repeated... He knew exactly where Palmyra was. “I had no idea there was an American outpost so near. That is quite an... exciting surprise.” He smiled widely, breaking the mood.

“Won’t you please join us this evening for a traditional Chrismas dinner?” Breitenfeld invited, finally.

“We would be most delighted,” Cramer said brightly. “Much appreciated, parson,” Gibbs echoed.
Posted by Unknown at 8:02 AM