Why do I keep posting about the similarities between fiction writing and cooking?  I really think there's alot to be said for the analogies.  The more I write, the more parallels I see.

My wife will tell you (she tells me, anyway) I'm a pretty good cook.  She's amazed that I can season without measuring, and can take 3 regular recipes and combine them into one allergy-free dish that tastes good.

She'll also tell you I'm very impatient in the kitchen.  Which makes breadmaking a chancy, frustrating process for me.  You just can't rush good bread!

I put the dough together - regular mixing stuff, done that - then add these little pellet-grains of activated yeast.

For about 3 minutes.  Or maybe 5.  And then I start to get this yawning fear that something isn't right - that maybe I did something wrong.

Ten minutes in, I'm trying to figure out what I might do to correct my presumed mistake.  Soon, I might be acting on that presumption, and probably short-circuiting the whole rising process!

Yes, it's true.  I've been telling people my first fantasy story - Uprooted - is "almost" done for about four months now.

In truth, the story has been "almost done" for four months.  It's just I was never satisfied with the result.  I kept thinking I'd be disappointed with myself if I published it in that shape.  I keep wanting it to be more compelling.  More interesting.  More tense.  I want the characters to be more meaningful to the reader.  I want the story to be more suggestive of a wider world and more stories ahead.

So I've been working on it.  Alot. 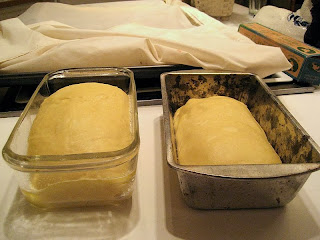 Not long ago, I was planning to publish a story that was 17,000 words long.  Recently I sent out a story that's 33,000 words long to a set of trusted beta-readers.  And while they're working on reading and providing critiques, I'm changing it yet again (in relatively small, but meaningful, ways).  It's growing, and filling the "pan."

I've grown wary and tired of using the phrase, "It's almost ready to publish."  So I won't say it again.  I may never use that phrase in the future!

But the fact that the "rising" has slowed, and the fact that my beta-readers are reading and sending back final comments, should give you an idea that this first story set in the world of Orinthia will be ready relatively soon.

I keep comfort in the idea that alot of the depth and background I've developed for this introductory story will be very helpful for me as I expand the series and add more novels.  Hopefully, those will be easier and quicker to write!

Or maybe I'll just realize that the story tastes better when it's allowed to take its own sweet
time.
Posted by Unknown at 12:16 PM